Key Definition of Creativity: Generation of ideas which are both novel and useful

This Case Study was generated at an Ideas Centre workshop in Poole (UK). The “Problem Owner” was the Innovation Director at a lifeboat service provider, who had been battling for some time to solve the problem of relatively low location rates for individuals who were reported to be overboard at sea.

Problem as Defined: How can we locate people who are overboard at sea more effectively?
Technique Used: Lego

Lego is a powerful creative problem solving tool, promoted commercially by Lego themselves (see www.seriousplay.com). Indeed, one can become accredited by Lego as a qualified Lego-problem-solver!

The technique is based on engagement with play, and accessing the more novel approaches within the right brain. Ingrained patterns of understanding of the problem at hand are scrambled by a requirement to model the issue using Lego – disorienting the problem owner and stimulating new ways of looking at the issue. Even the most abstract of problems can be effectively modelled – then providing a 3-dimensional, tangible, model of the issue, that can be pushed and probed by a Facilitator to make sure that the model is as good as it can be. It is then possible to literally “see” the issue.

Once the problem is modelled, one then stays in “Lego play” mode and solves the problem – based on the model that has just been produced. An independent, objective, naïve, Facilitator is helpful here – ensuring that the solution is derived from the Lego model, rather than force-fitting a real-world solution into the model.

Whatever solution is generated in Lego – assuming that the model does indeed represent the problem absolutely solved – is simply a metaphor for a solution in the real world; the challenge (best generated with a skilled Facilitator) is to translate the metaphor!

Step 1 – represent the issue via Lego

Here is the model produced by the Problem Owner: 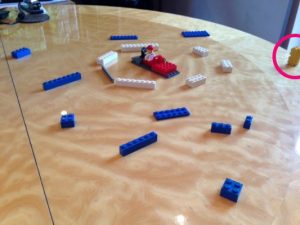 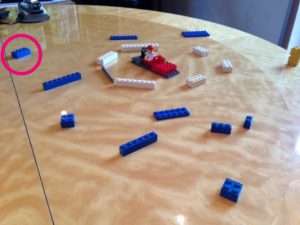 (a) Blue bricks represent the waves at sea. The yellow brick in the right of picture (circled) represents the reported location of the overboard person. The white bricks indicate the computer-estimated search area (based on wind direction and tides). No joy – the computer models frequently get it wrong so that the boat is searching in the wrong place. The person might be quite close, but is actually behind the “wave” on the far left (but cannot be seen – hidden by the wave – circled in (b)). It was interesting to earn that it only take a 6 inch wave to obscure the man from the boat. Scary!

Step 2 – solve the problem in Legoland!

It is often easier for the naïve Facilitator to generate a solution, as we know that they are not burdened in any way by the reality of the situation, so it is much easier to solve the problem based in this imaginary world of Lego. The Problem Owner will all too often try base their solutions on what has been tried before (i.e. reality), and then reverse this into the Lego model – then losing the creative magic of the process.

In this Case Study, after very little thought, the “play” solution was easy – simply remove the blue brick, revealing the man-overboard to the boat by creating a direct line of sight (c). 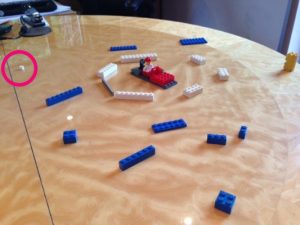 Step 3 – translate the Legoland solution into the real world

Now, and only now, convert this metaphor into a real world solution.

What thoughts on a system that allows one to be located, without being seen? Simple – GPS on a phone does that; my wife tracks me wherever I disappear on my bike – she clearly cannot see me, but she absolutely can see me (on her ipad!). Now, the idea of insisting that someone grabs their mobile phone prior to going overboard is ridiculous, but suppose you built a GPS device into a line of clothing – we invented the “SailSafe” brand right there in the moment!

However, clearly, not everyone would buy such clothing. Hmmm.

The we got it! Every boat that goes to see, by regulation, must carry enough lifejackets for everyone on board. Why not build the GPS into a lifejacket? Scanning the internet you can already buy these (optional of course, and expensive) – but the key issue for the Problem Owner was different – it was all about lobbying government to change the regulations, to dictate that every lifejacket in UK waters has a GPS device within it.

This then provides the alert system – and the whole Lego model solution is then delivered!

Cost might be an issue – but consider the cost of wasted time and resources, searching and failing to find. The lifeboat organisations could make massive saving (in terms of both cost … and lives!), even if they need to partially offset the cost.